Another example that age is just state of mind! This time I want to share an Instagram account of the truly magnetic Austrian model. Ernestine “Erni” Stollberg is 95 years old and she has become an Instagram sensation.
For over the year Erni appears on @park_wien, Viennese concept shop Park, but not because she is 95, just thanks to here chameleonic skills in front of the camera. Nowadays hiring older models for promotional campaigns is very popular. I really like it I have to admit, the models are having a moment on the runway and even have their own full-fledged agency. But Stollberg’s case is not matter of some sort of trend, it came from personal relationship. Ernestine has had always exchanged friendly greetings with Strasser and co-owner Helmut Rutner because she lived nearby. Things has changed when the pair bought a puppy, its presence drew her again and again to the store. And somehow owners found that Ernestine is perfect model. For Stollberg, modeling is something that comes naturally, but there was period in here life that could help here feel so comfortable in the spotlight. In the 1930s, she was part of a Jewish dance company that specialized in “revue,” a theatrical and relatively sexy routine for that time period. In 1939, just ahead of Germany’s invasion of Poland and the start of World War II, the entire troupe fled Vienna for Buenos Aires. Though not born Jewish herself, she eventually married the company’s Jewish manager and returned to Vienna after the war ended.

Take a look at Ernestine photos, and of course visit park-onlinestore.com 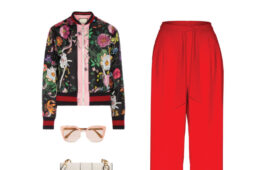